How Much Power Does Betsy DeVos Really Hold to Shake Up Higher Ed? – The Chronicle of Higher Education

How Much Power Does Betsy DeVos Really Hold to Shake Up Higher Ed?

Most education secretaries have left a limited mark on higher ed. Here’s why. 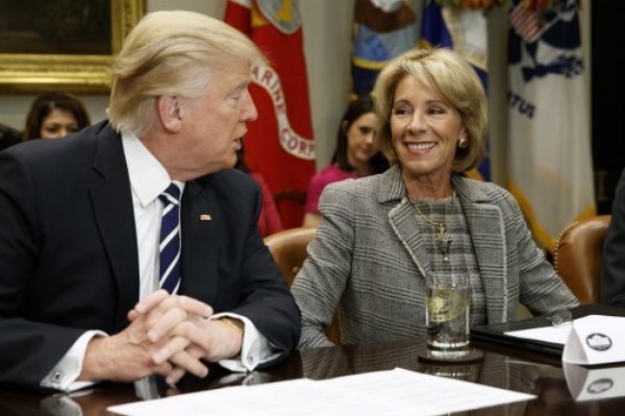 Evan Vucci, AP Images
President Trump and Secretary of Education Betsy DeVos met with parents and teachers in the White House on Tuesday.

Last week’s confirmation of Betsy DeVos as secretary of education has raised alarms among many academics, who worry that the billionaire philanthropist might do harm to higher education. During her bruising confirmation battle, many people raised questions about the new secretary’s grasp of education policy and her commitment to public education. Her opponents also raised fears that she could ease up on the Obama administration’s crackdown on for-profit colleges, or its strict enforcement of the gender-equity law known as Title IX.

But beyond rolling back many of her predecessors’ signature enforcement efforts, how much power does Ms. DeVos really wield over higher education? If history is any guide, her influence may end up being more limited than her critics fear. Most education secretaries, after all, have left a limited mark on higher education. Here’s why:

For the most part, though, education secretaries are just carrying out campaign promises of the presidents who selected them. If the president had a robust higher-education platform, then his secretary is likely to be viewed as active on higher education.

If a president shows little interest in higher education, as Mr. Trump has, then his secretary is likely to follow suit. Even Sen. Lamar Alexander, who was president of the University of Tennessee when President George H.W. Bush tapped him to be secretary of education, is best remembered for his efforts to reform elementary and secondary schools.

For the most part, education secretaries are just carrying out campaign promises of the presidents who selected them.
Historically, Democratic presidents have had more expansive higher-ed agendas than Republican presidents, who have often campaigned on a pledge to abolish the Education Department entirely. Donald Trump has continued in this tradition, offering only one substantive idea to date: a new income-based student loan repayment plan. In the almost 40 years since President Jimmy Carter and Congress created the Department of Education, there have been 11 confirmed secretaries of education, including Ms. DeVos. But it wasn’t until the 1990s that secretaries got really involved in shaping higher-ed policy, according to longtime aides. Up until then, secretaries — and their deputies — spent much of their time tackling crises in the student-aid programs, such as Pell Grant fraud, sky-high default rates, and fiscal mismanagement.

Daniel T. Madzelan, who spent 30 years as a career employee at the Education Department, says Mr. Clinton was the first to discover that issues like college costs and student debt resonated with middle-class voters.

“Back in the ’80s, you’d tell someone you worked in the Education Department, and they’d say ‘which state?’” he recalls. “The Ed Department was a sleepy backwater burgh in the federal government.”

“Back in the ’80s, you’d tell someone you worked in the Education Department, and they’d say ‘which state?’”
Once confirmed, education secretaries take their cues not just from the president, but also from groups within the White House that help develop and carry out his policies, like the Domestic Policy Council and the National Economic Council. Secretaries may also face pressure from Congress and state attorneys general to act, as Ms. Spellings did on the issue of conflicts of interest in student lending. And they may be compelled to respond to events beyond their control, as were Ms. Spellings and her predecessor, Roderick R. Paige, with the terrorist attacks of September 11, 2001, and Hurricane Katrina, and as was Secretary Arne Duncan with the student-loan liquidity crisis. 2. Education secretaries don’t draft higher-ed policies, either.

That’s the work of political appointees — most notably, the under secretary and assistant secretary of postsecondary education — and a horde of career service employees under them.

The law that created the Department of Education specified that the assistant secretary was to be “the principal adviser to the secretary on matters affecting public and private postsecondary education.” The under secretary was to “have responsibility for the conduct of intergovernmental relations of the department.”

Both Bill Clinton and George W. Bush had strong assistant secretaries who played key roles in shaping higher-ed policy. Over the years, however, the balance of power began to shift to the under secretary’s office. The shift accelerated under President Obama, who created a new role — deputy under secretary — for the controversial and influential Robert M. Shireman.

The Education Department appointees aren’t the only ones crafting higher-ed policies, either — the White House policy councils often get involved, too, and they don’t always agree with the Department of Education. 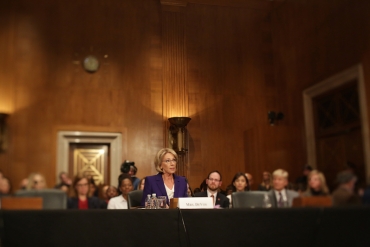 During the Obama administration, for example, the department and the Domestic Policy Council differed over the purpose of the president’s plan for college ratings — whether they should be strictly an information tool, or an accountability measure. And during the George H.W. Bush administration, the department and the policy council disagreed over whether the government shoud make loans directly to students, said William Hansen, who served in both Bush administrations. The policy council supported trying direct lending, but Mr. Alexander was strongly opposed to the idea, he recalls. In the end, Congress settled on a small pilot.

Mr. Shireman frames the tension between the department and the policy councils as a contest between idealists and realists — the “announcement engine” that’s closer to the president, and the people in the agencies who “have to run the programs.”

“The White House is always pushing for things, and the department is always telling them to get real,” he says.

3. Secretaries can’t eliminate the higher-ed posts — or the entire Education Department, for that matter.

As a candidate, President Trump expressed interested in eliminating the Department of Education, or at least reducing its power and reach. But as The Chronicle and others have reported, the administration can’t single-handedly abolish the agency; that would take an act of Congress.

Still, could he get rid of some of the key higher-ed posts, in the name of smaller government? Again, not without some help from lawmakers. Both the under secretary’s and the assistant secretary’s roles are spelled out in statute; they can’t simply be cut with the stroke of a pen.

What he could do is leave the positions unfilled for an extended period of time. Such a move would be a clear signal to Ms. DeVos that the President won’t prioritize higher education, and that the secretary should focus her attention elsewhere.

Mr. Trump could also call on Congress to cut spending and staff at the department, making it harder for Ms. DeVos to get things done.

More than perhaps any other education secretary, Margaret Spellings had her own vision for higher education. In 2005, she created a 19-member Commission on the Future of Higher Education, and charged it with crafting a plan to make higher education more accessible, affordable, and accountable.

“The president was following her,” says Mr. Longanecker. “She was the brains behind the agenda.”

The commission’s report made a splash, and one of its members, Sara Martinez Tucker, was put in charge of implementing the recommendations for the department.

Even though Secretary Spellings didn’t get many of her ideas into law, she still managed to start a conversation about accountability that continued in the Obama administration.
But 10 years later, it’s hard to point to any concrete changes that resulted from the commission’s work. And that’s at least partly due to timing. The report came out just two months before Democrats wrested the Senate from Republicans, giving them control over both chambers of Congress. When they finally got around to a long-overdue renewal of the Higher Education Act, they had their own ideas about how to improve higher education. President Obama and his secretary, Arne Duncan, faced a different challenge. Mr. Obama took office just after the reauthorization was signed into law, and so didn’t have one major vehicle for change. And by the middle of his second term, he didn’t have a Democratic majority in either chamber of Congress, either. Determined to make his mark on higher ed regardless, he turned to executive orders and rules to advance his agenda.

Mr. Trump’s timing, on the other hand, couldn’t be better. Republicans control both chambers of Congress, and there’s a reauthorization pending. But Mr. Trump, unlike Mr. Obama, has shown little interest in higher education, and Ms. DeVos, who is best known for supporting vouchers and charter schools, has no background in the sector.

Jeff Andrade, a deputy assistant secretary in the George W. Bush administration, said that given her inexperience, Ms. DeVos might do well to borrow ideas from the seasoned Republicans who lead the congressional education committees: Senator Alexander, of Tennessee, and Rep. Virginia Foxx of North Carolina, who have been working on the next reauthorization for a couple years already.

Ms. DeVos “can look at the good ideas that have been vetted and pick from there,” Mr. Andrade said. “There’s less pressure on her to develop her own agenda.”

5. But the bully pulpit works.

So if secretaries of education don’t set the agenda, don’t write the policies, and depend on Congress and good timing to get things done, how can they leave their mark on higher education?

One way is through the bully pulpit. To Eugene W. Hickok, who served as deputy secretary under George W. Bush, the secretary’s role is “mostly an opportunity to get the country thinking about issues and hope it leads to change at the state and district level.”

“It’s a great place to start a conversation, and to try to put institutions in a position where they have to respond,” he said.

So even though Secretary Spellings didn’t get many of her ideas into law, she still managed to start a conversation about accountability in higher education that continued in the Obama administration.

“Nothing resulted from the commission, but a lot of the legacy of the Obama administration started with her,” said Sally Stroup, who was assistant secretary for postsecondary education for four years under Mr. Bush. “All the new [transparency] websites are things she would have wanted to see.”

But Mr. Madzelan says there’s an even easier way for secretaries of education like Ms. DeVos to leave an imprint on higher education: “Choose a good under secretary.”